Suz and Viv, The Stylish Twins

Over the course of blogging I've come across other blogs, whether big or small, that I always make sure to read when they post something new. Suz and Viv are two girls who's fashion blog always seems to draw me in with their stylish outfits and fun looks. Yet the other drawing factor, I think, would also be that they have a unique twist being twins and I myself can relate to many of their experiences as I am also a twin. So, I was delighted when they agreed to my inquiry about featuring them on my blog and after reading some of the answers they sent in reply to the feature's interview I felt even more drawn to them as my twin experiences range very similar to their own, especially when it came to style.

After reading their interview about how being twins impacted their own personal style you should go say hello to them on their blog, Suz and Viv. They would love to meet you! 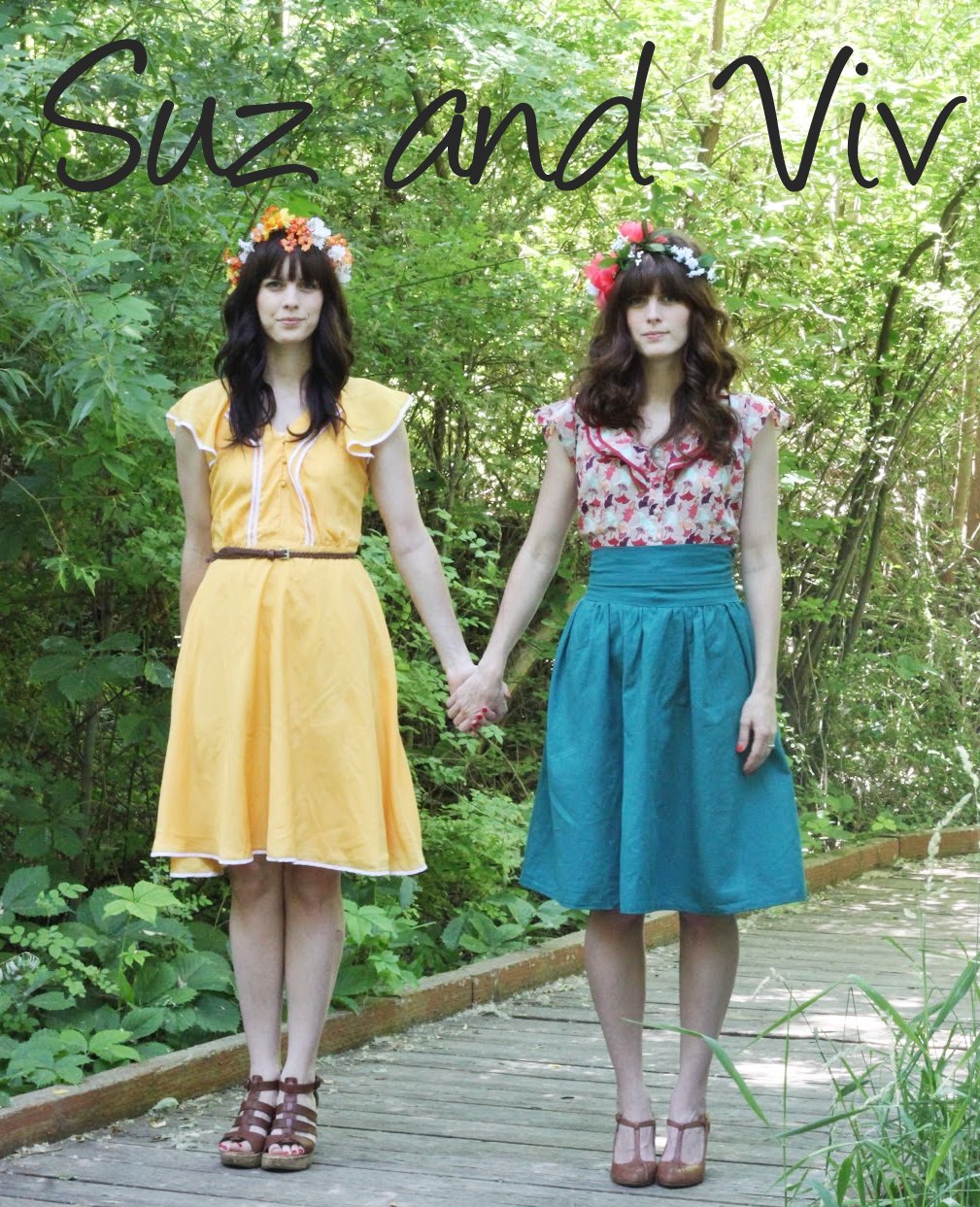 1) Explain how you feel life was different for you two growing up as twins than is was for anyone else growing up without a twin.

We both loved having a twin.  We were both pretty shy around people we didn't know so it was nice to always have a best friend with us when we went new places and and met new people, however, part of our shyness may have been because we always relied on eachother.  I think we always stuck up for each other (for the most part).  Viv did have a bit of a mean streak in fourth grade :).  I think Viv cared more about having her own identify than Suz did. When people would group us as one person instead of individuals it really bothered Viv.  We were constantly called "the twins" instead of by our names.  That always bothered her.

I did notice when I was a bit older that often when I was referring to myself I would always say "we" or "us" instead of just "me" or "I". 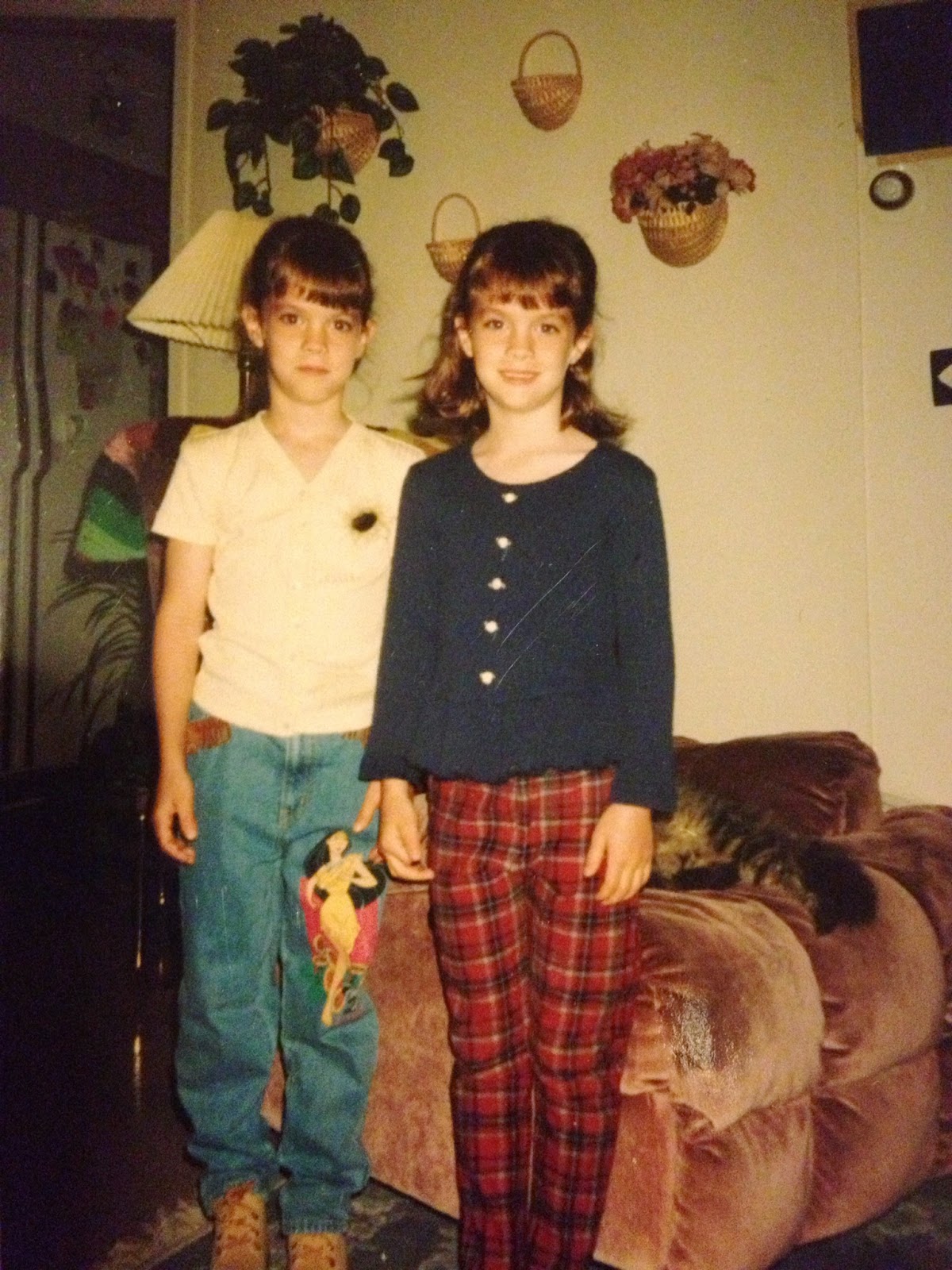 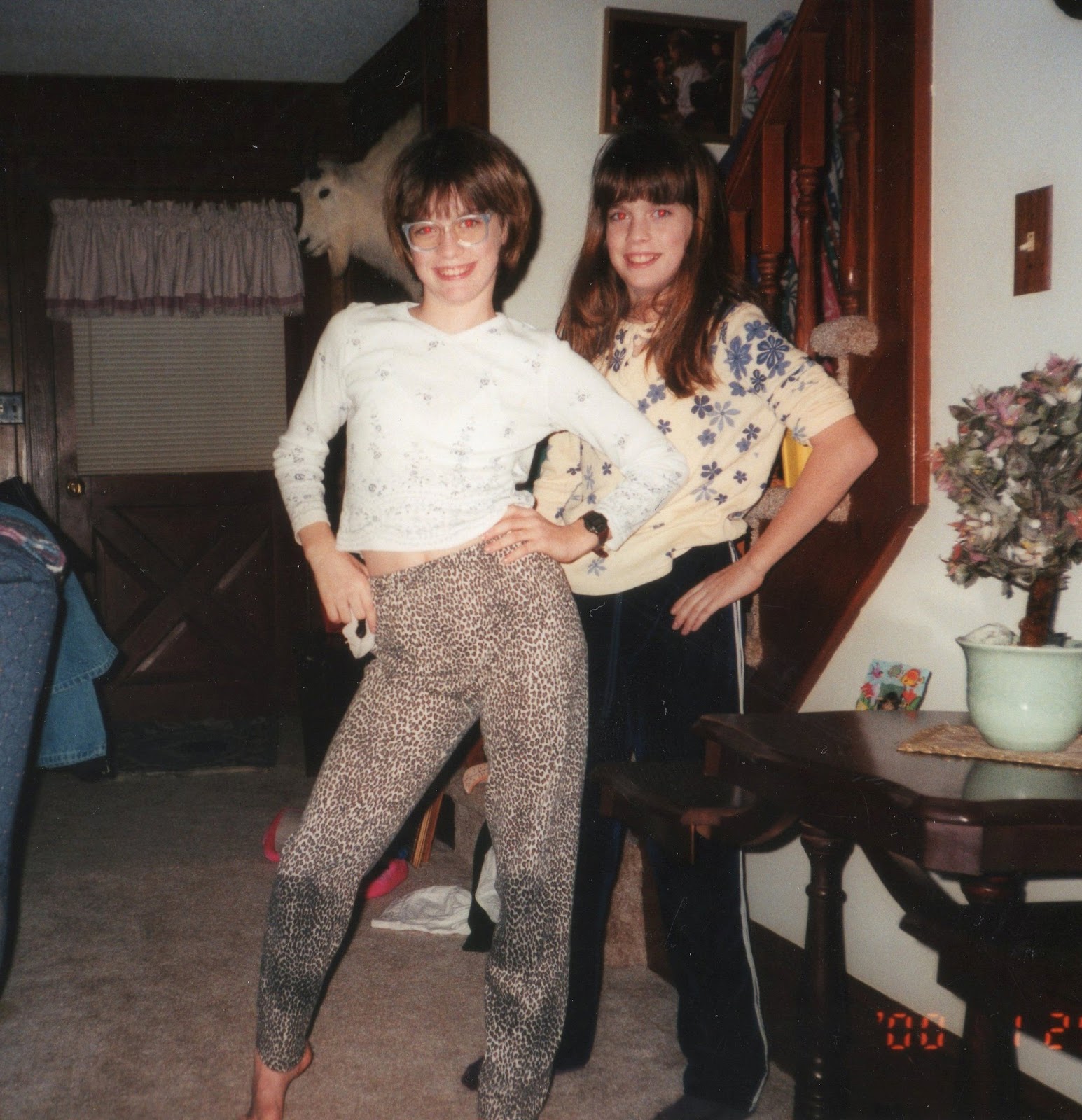 2) Growing up were you encouraged to dress alike or wear whatever you guys wanted?

When we were little my mom would dress us alike.  She would put one bow in my hair (Dink 1) and two in Viv's (Dink 2). Our Papaw gave us the nickname because we were dinky little babies.  When we were a bit older, elementary school age, Viv hated to dress alike. Most of our clothes we still had duplicates of and if she put something on we had a second of I would go change into it just to annoy her. I didn't really care either way if we dressed alike or not. Suz just liked to be a brat :)  Once we were in middle school we didn't have many duplicate clothes any more and we stared having our very own clothes. 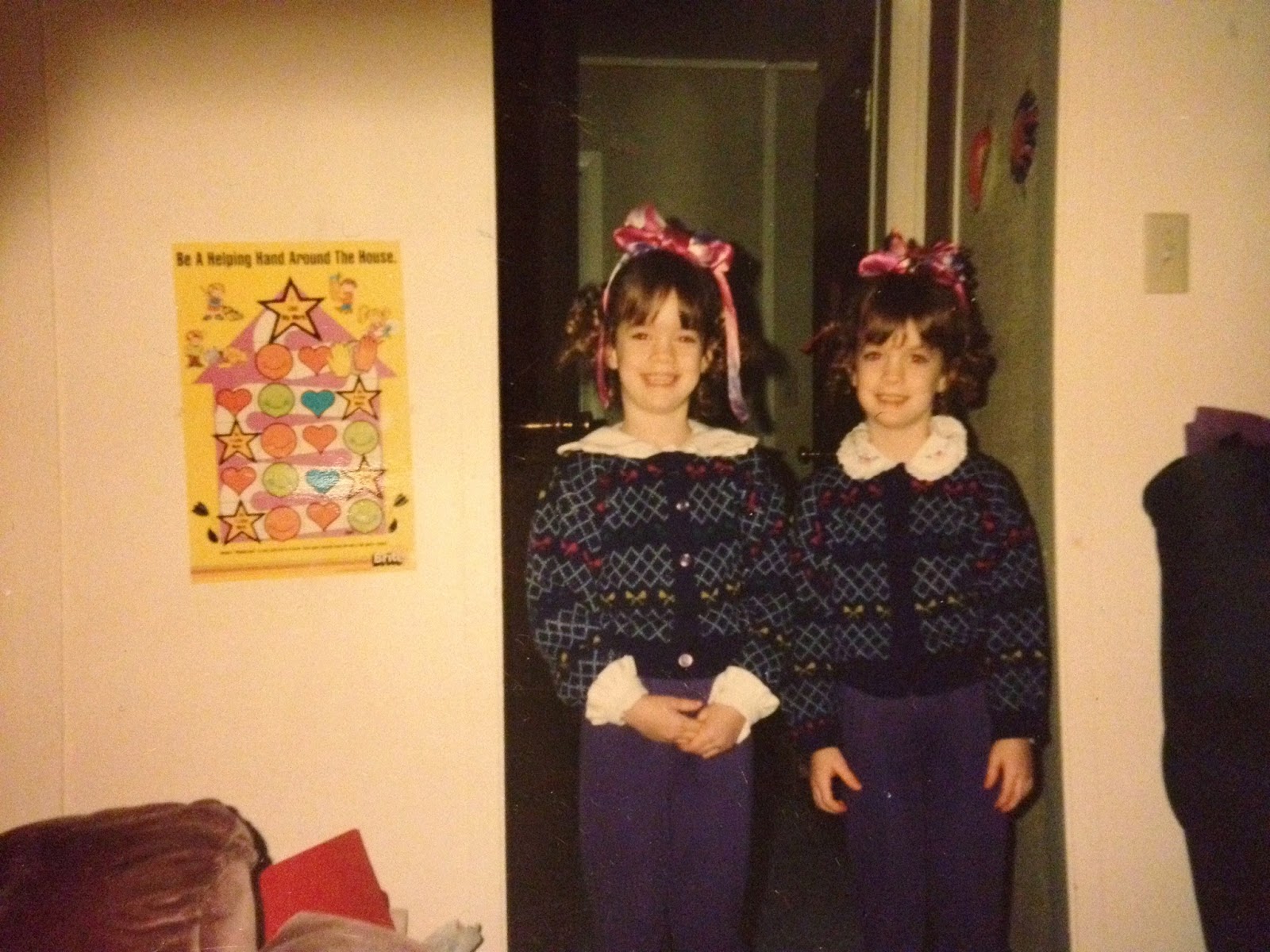 Our mom did always keep Suz's hair short and Viv's hair longer starting when we were about 6. I'm not sure if Suz asked for a hair cut or how it was decided.  We kept our hair that way until now, actually. After Viv was married she chopped her hair off and has been playing catch up.  Now our hair is almost the same length, Suz's is just a bit longer. 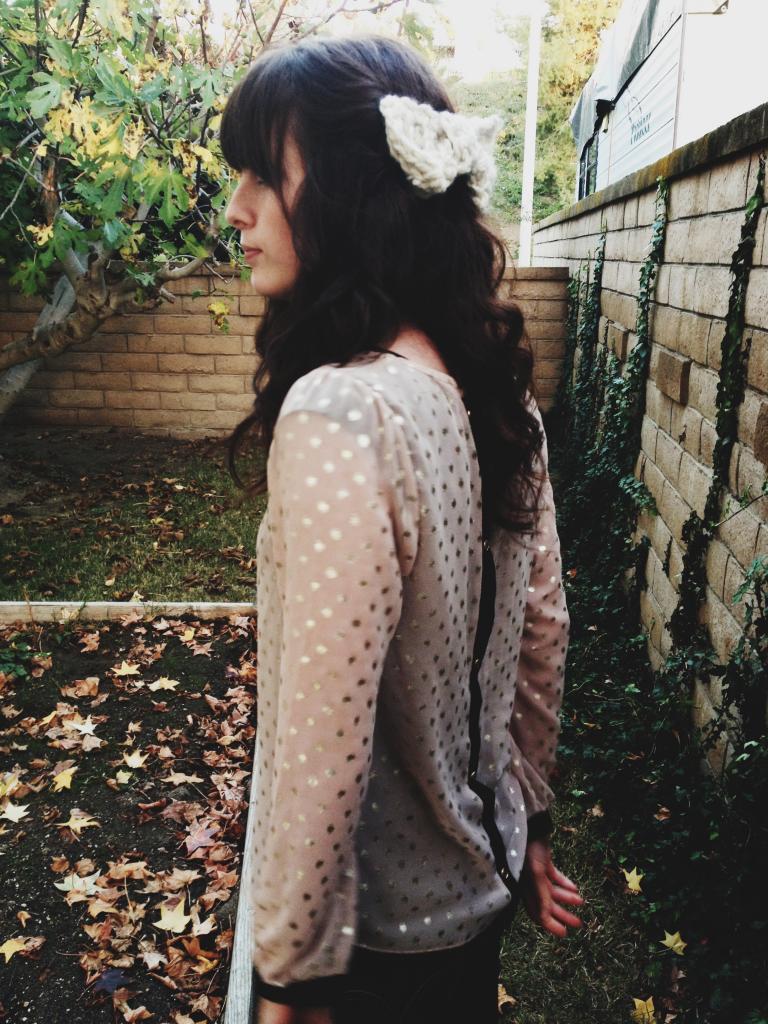 3) Do you feel as you get older your styles grows more and more apart or more similar to one anothers?
I think we've always had really similar styles.  We are usually drawn to the same items and same styles.  We actually went shopping together the other day and separately picked out all of the same things to try on. Right now Viv has a job where she has to dress up every day and Suz bikes to school every morning and we live in Utah (for reference, its only gotten above freezing one day this week) so I think it looks like she dresses a bit nicer and more stylish. But Suz is just too cold to put on a skirt and ride her bike!  In real life though I think our styles are very similar. 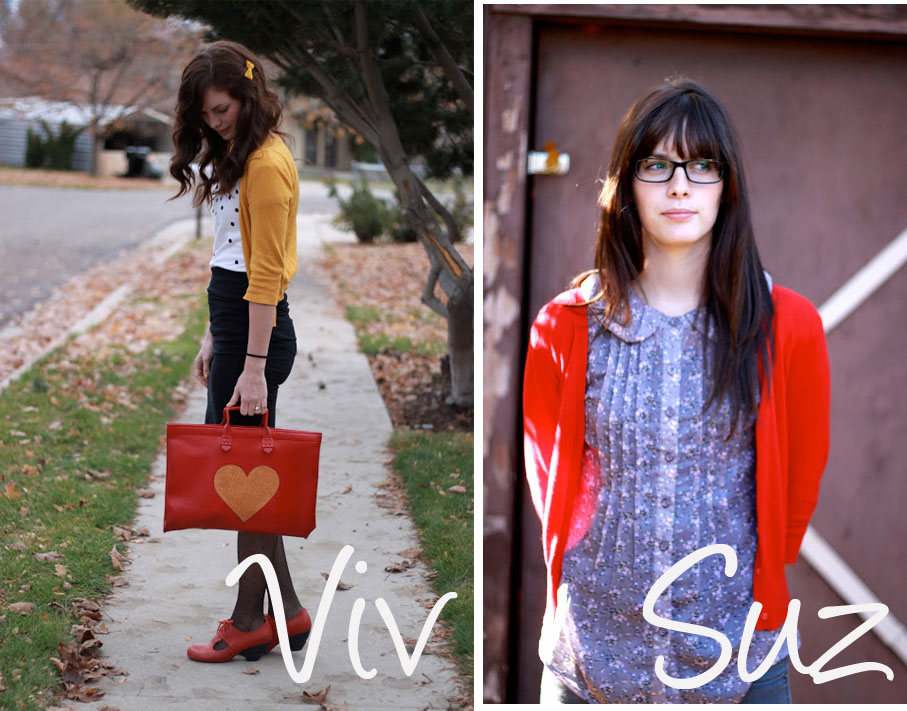 4) How influenced are you by each other's style?
We definitely influence each other's style.  Pretty much every night we text each other "What should I wear tomorrow?"  I think half of the photos in our phone are outfits that we try and on send each other to see what the other one things.  We encourage each other to try to dress more out of the box and be a little brave with what we wear.  If I didn't have Suz's advice I think I would be afraid to wear some of the things I do with out having that encouragement   We also borrow each other's clothes all the time.  I think by seeing each other in the same items but worn different ways helps us both change our styles. 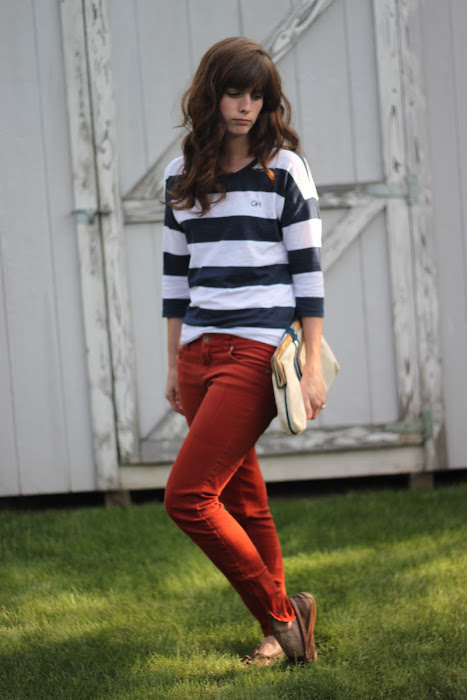 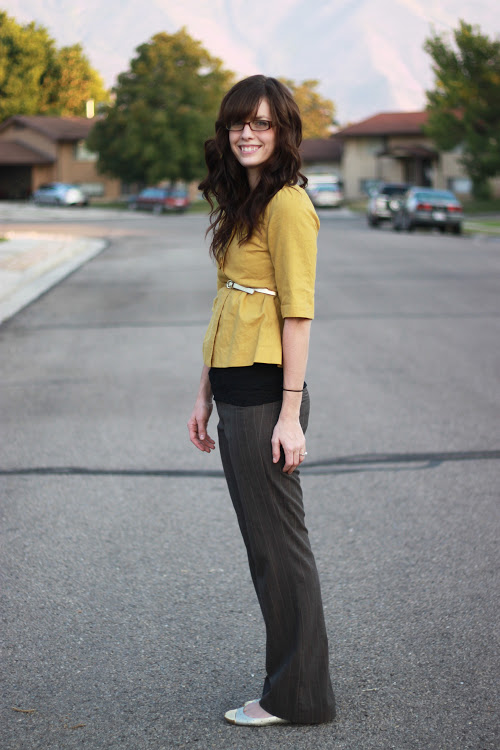 The change from childhood style to adult style is always such a fun one to look back on and I loved looking at Suz and Viv's past photos. Adorable!
Posted by Teaka at 6:56 PM

Thanks so much for having us Teaka! -Viv