Samples, mock ups, muslins, call them whatever you want but sewing up a simple example version of a pattern you've just created is incredibly crucial for those who sew. So many times I'ved wanted to just draft or drape an item and then start working with the real fabric right away. Sometimes it's feels like such a waist of fabric and time but it's only then that you get to see the real fit of the pattern and can make the adjustments before hand.

This morning I walked by a sample of a pattern I made earlier this week and I laughed to myself. I had spent a good four to five hours planning and drafting this dress for my summer collection and was so super excited to start sewing it. Thankfully I spent another two hours making a mock up shirt version of it. I discovered this pattern was just plain awful and as you can probably see there are so many things wrong with it. Obviously this isn't the right fabric or color but rather the fit and shape of it isn't right. 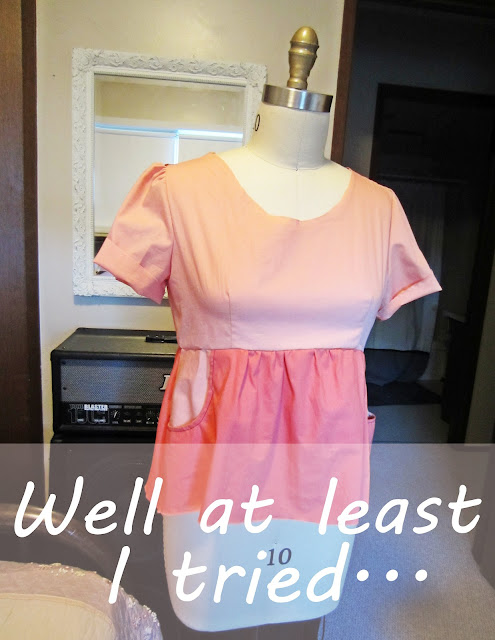 It's no shocker that for every one good item I've sewn there are three or more other failed projects in the trash can. This use to frustrate me but I'm realizing now that it's just part of the process. I'm learning what doesn't work together.

In any case I'll be going back to the drawing board on this dress. But hey...at least I tried.

I hope you guys all have a super productive weekend and you try something new. Even if you failed...at least you tried.

No! that could be so cute over a really tight high wasted pencil skirt!

haha oh well. everything else you've done has been outstanding. you have to fail sometimes :)

oops, this is emme

Ohhh I know this all too well. I am still learning how to sew and every time I sit down to make something I end up with 4 awful versions and 1 decent one :D

If at first you don't succeed, try, try again!

I do love the sleeves on that dress, though :)

It's way better than what I can do! -Jessica