An Anniversary Fill With Surprises

Goodness gracious what a beautiful anniversary we had yesterday. Packed with unexpected surprises for both of us. We started the morning off as per usual, nothing fancy except that Jonathan presented me with an early gift, which I opened and discovered a helmet. I thought it was funny as he's always telling me I need to be wearing one when I ride my old, worn out bike. Anyways I was happy with it and we continued on. I got off work early that day which gave me plenty of time to pick up last minute items for the surprise I had planned for him that evening.

Mid afternoon I was down in my sewing room when I heard the door bell ring. The other day Jonathan said he was having a packaged delivered so I assumed it was that. Yet when I went to answer the door there was nobody there except the most beautiful deep red bike. I was in shock. I stood there for awhile looking around for someone to apear. Nobody. After inspecting the bike I found my name on it and knew it was for me. Finally the delivery guy peaked his head around the corner. To say the least I gave that strange man a big hug and couldn't stop thanking him for delivering it. Right away I called Jonathan and could hardly express my pure delight. Such a beautiful, totally unexpected surprise. It's a type of bike I only dreamt about and never thought I'd ever own one. The best part was that Jonathan pick this perfect bike out for me as he thought it suit me best. 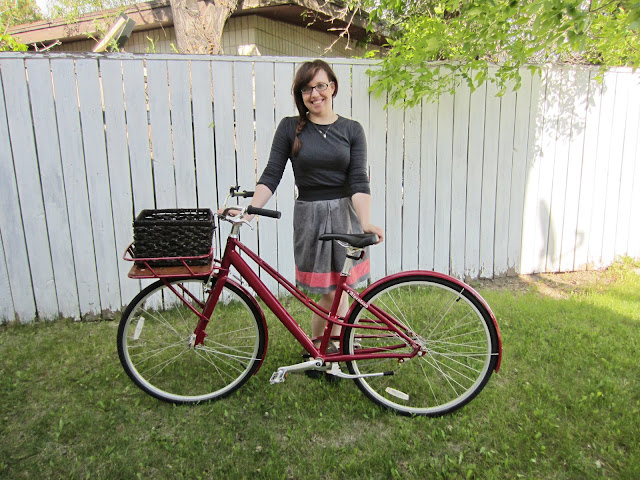 When Jonathan finally arrived home from work and after a thousand...ok more like 5 kisses we got ready and went out for supper. I was very excited because while we were out of the house I arranged for some friends (Jodie and Josh) to sneak into our home and set up a surprise. So while we were enjoying a lovely meal out they were setting up our table with a cute cake I ordered from Crazy Cakes, some photos in frames I had printed off and the gifts I had wrapped for Jonathan. When we finally got home it was such a delight to see Jonathan's rather confused face. He could have sworn none of this was there when he had left. 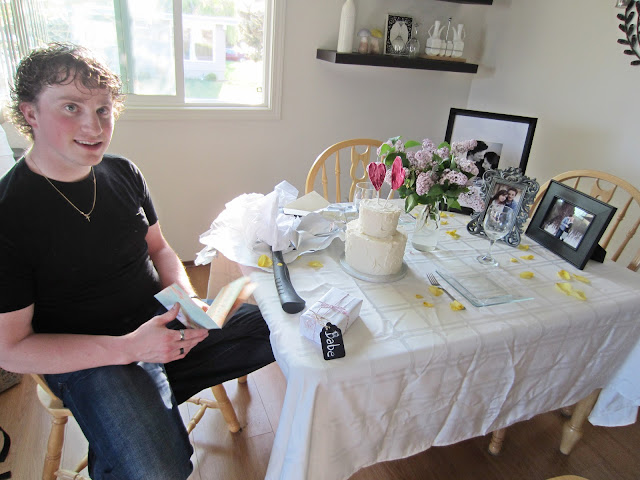 I gave him a scary camping knife and big axe (super manly stuff). I cut open the cake but we were so full from supper I only took a taste of it. It was delicious though! 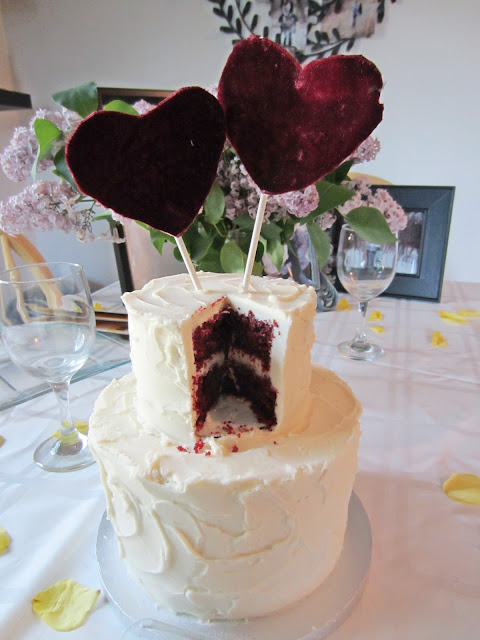 We had such fun night with surprises and spoiling each other! I think we should do it more often. ;)

wow you guys really go all out when you celebrate! i am soooooo jealous of your bike. it's awesome!!! your surprise for jonathan was so cute too. i'm glad you guys had a good day :)

Love this!! So glad you took the time to celebrate :) AND where did Jonathan get that bike for you - I want one JUST LIKE THAT!!!!

Happy Anniversary...you two are seriously too cute. Loved seeing what y'all got each other.

Oh that's so lovely! What a wonderful surprise & I do love that bike.
Sounds like you had a wonderful time together and that cake looks pretty damn delish

sounds so fun. i loveeeeee love lovee your bike and that cake looks fantastic.

This is absolutely adorable. I mean really I'm kind of in love with that red bike and your red cake. Bah.. it all looks so slow drool!!