Marriage can do funny things to a person especially when holidays roll around and family traditions are brought up. The question of which ones to keep and which ones to let go will probably become more debatable once children come into the scene but I still can't help, every once and awhile, bringing up the topic of Santa Claus to Jonathan.

The friendly battle is on between us. He grew up in a family where Santa Claus was a big part of Christmas and to this day still recieves the odd gift from the the jolly man himself. ;) It`s something he enjoyed as a kid and a tradition he hopes to carry on to our children. Mean while I grew up in a household where Santa Claus had no real part in our Christmas celebrations and in all honesty since gifts were not that abundant we all knew that it was Mom and Dad who had given us the gifts. I loved how my Mom would always say something along the lines that they would never let some fairy tale man take the credit for the gifts they so loving made or spent their hard earned money on for us. As children this only made sense and I loved Christmas just as much as the child next door.

Today I realize that Jonathan and I have our own family and will be creating our own traditions (I`m realizing more and more how much my husband is into traditions) as little ones come into the pictures. So, no matter what we grew up with or our different view on things we will be altering, adding or taking away things according to the flow of our family life style. Yet for some reason this whole Santa Clause thing is something I just can`t seem to let go of.

Jonathan knows I increasingly loath this modern red suited man and the more the holidays progress the more I detest the concept of this guy. Don`t get me wrong I love the stories and the history of St. Nicholas. In fact I could see some aspects of Santa Clause introduced into our family Christmas traditions in much less materialistic sense. 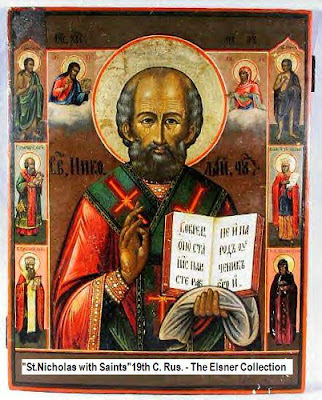 The real history and stories of this bishop of Myra who lived the 4th century has such beautiful roots in Christianity and was credited with doing a number of miracles and giving gifts to many children. He was so loved that he had a day dedicated to him in early December (hence being connected with Christmas). So, in all truth I`d love for my kids to know the stories of who he really was. But to have them simply caught up in the media pushed guy from the North Poll with a bag of toys who eats sweets seems so lost from the real man it sad to me. 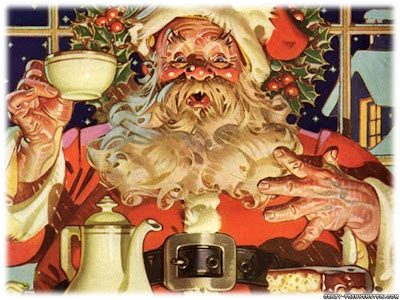 Obviously this is something that sounds incredibly over dramatic with the current spirit of Christmas but it`s something I just wanted to share as it`s been on my mind an oddly large amount of time.

I`m sure you all have largely different opinions than I do so tell me how you included Santa Claus in your traditions. I`d love to hear.
Posted by Teaka at 7:43 AM

I'm kind of in the same boat- although I think Tyler would willingly give up the idea of Santa clause. Coming from a family that only ever celebrated Christmas in a simple way, into a family that turnes christmas in a huge celebration, it will be interesting making the switch!
Good luck to us to sort it out before the kids come, eh?

This is definitely something we have not even really talked about yet. We both had Santa Clause growing up so I'm sure we'll do it with our kids but I definitely see your point of view as well! I don't want it to just be a big media thing. My parents did random things every year for Christmas to help us focus more on the spirit of the season rather than the media aspect of it. One year we had Christmas the day after Thanksgiving {none of us kids knew this would be happening!} so that we could focus on serving others throughout the actual Christmas season. Another year my parents did the Twelve Days of Christmas on our doorstep and made us think it was from someone else. Haha. Those are the big ones that I remember but I do know that my parents always made an effort to help us focus on what is really important during this wonderful season.

Amanda- yeah it's probably best to sort these things out before the kids come though sometimes it just seems easy just to keep pushing something off until the very last moments. :S

Emma- Wow! You're parents were awesome! What a beautiful idea to have your Christmas after Thanksgiving and freeing up time to serve people. That's something I've never heard of before. Also I LOVE that 12 days of Christmas idea your parents did. I hope the didn't send you guys the actual things though.... seven swans a swimming or six geese a laying aren't quite the perfect family pet. :P Haha but that's such a sweet idea!

Jesus. Just reading your writing, I can tell that you grew up without any Christmas magic. What a drag.