At the beginning of December I signed up for a holiday swap over at The Zufelt's blog that involved sending a package in the mail to an assigned blogger with something that represented a tradition you keep during the holidays. It was exciting to get my blogger Krisi and began to think up ideas of things to send her. It was a blast shopping and wrapping up the items but I won't tell you what I sent her as she still hasn't received the package. Hopefully today or tomorrow she will. (Crossing fingers)
However just this last friday I was thrilled to get my package in the mail from her. As soon as I got home I opened it up and found the cutest fleece pj pants wrapped in a pretty bow and with a note. The note said that every Christmas Eve their family has a tradition of opening one gift and they give each other a new set of Christmas pj pants. I just loved that idea! I'll be honest and admit that I practically lived in those pants when I was home this past weekend. They were so comfy. 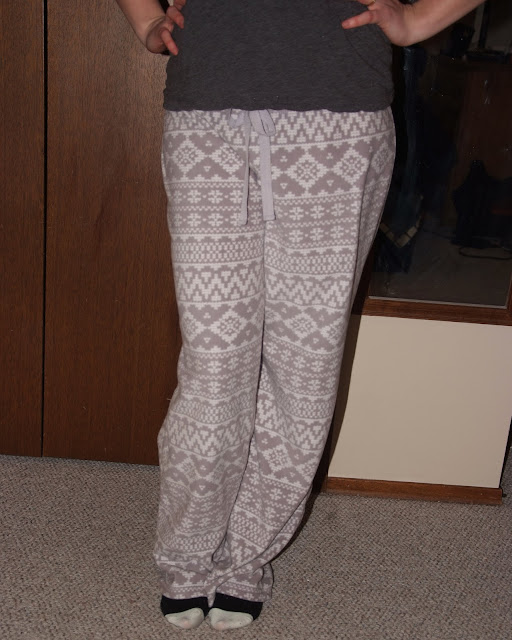 It was such a treat to meat Krisi and be apart of Whitney's holiday swap. I hope next year she does it as I'll definitely want to do it again! :)
Posted by Teaka at 8:52 AM

Those fleece pj are so cute. I love the design.
http://www.lyzhang.com

those pj pants look so cute and comfy!

P.S. I've chosen you for the versatile blogger award. check out my post tomorrow (tuesday) to see what its all about :)

Love your blog! I've passed the "Liebster Blog Award" onto you, check it out on my blog! Have a great day : )