Fair, Food and Being Fried

I feel like I've been doing a terrible job with keeping up my blog. It's been almost a week since my last post. Yet I suppose when it's hot out the last thing on my mind is sitting at my computer while I'm burning up inside.

Regardless I'm back, even just for a short post.

As most of you know this weekend was a long weekend and such a beautiful weekend at that.

Jonathan and I went to Medicine Hat to meet up with his mom to pick up a BBQ. We weren't sure if we were going to stay and spend the night or go home early but after talking it out in the middle of the Sears bathroom decor department we decided we'd stay and enjoy our time with family. I'm so happy we stayed as we had a blast.

We spent a good portion of Saturday afternoon and early evening at the fair grounds with his mom, Aunt and little cousin. We were able to catch a dog show, eat tasty fair food and Jonathan went on a ride with his his cousin. We ended up doing a lot of walking but over all it was just fun taking in everything. 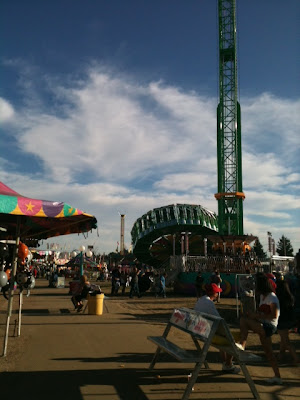 By the end of the night we were all exhausted and returned back to his Aunt's place where we played with their awesome big poodles and the finished up the night watching the fair's fireworks on their front lawn.

The next morning after breakfast we went to the local beach (Echo Dale) and spent our time swimming and soaking in the sun. Mind you I'm a pretty big fan of the shade so when I could I tried to cover up avoid any chance of sunburn.


Sadly though by the time we left Medicine Hat that Sunday evening I did have a little burn on my shoulders but nothing compared to the cherry red that covered Jonathan's legs, stomach, back, shoulders and face. I couldn't believe how burnt he got, still can't. Poor guy. We thought we were protected at the beach but even after lathering on sunblock he could hardly go to sleep that night. So yesterday and for the next few days he's been pumping up on pain killers and I've been covering him in aloe vera gel. The saddest site was seeing him walking out the door this morning to go to work. He  looks like he's in so much pain.

But like I said we had an awesome weekend filled with family, food and good times. Couldn't have asked for more.