Winning The Battle Over Mac and Cheese

Whether this is blog worthy or not is irrelevant to the fact that I have successfully made real macaroni and cheese! The best part is that it doesn't come out of a box and that Jonathan will eat!

Early in our marriage I discovered that Jonathan and I had two different ideas of what mac and cheese really was. I grew up with a the macaroni noodles mixed with cheese whiz. It may sound gross but as a kid (even now) it was amazing. But Jonathan never liked that idea and he only liked Kraft Dinner.

One time, in my attempts to win him over I tried this new recipe that included flour and random things that just turned into a pot of slop. From that experience on Jonathan never let me make mac and cheese as obviously in his eyes it just was a fail. It had to come out of a box.

After a year of lacking real, true macaroni and cheese, yesterday turned into my redeeming day. Jonathan wasn't going to be home till later so I looked up some recipe and went about attempting a pot of cheesy goodness. I had never baked baked mac and cheese or put bread crumbs on top before but that's what all the recipes called for so sucked it up and did as they said.

Like I said above it turned into a success! 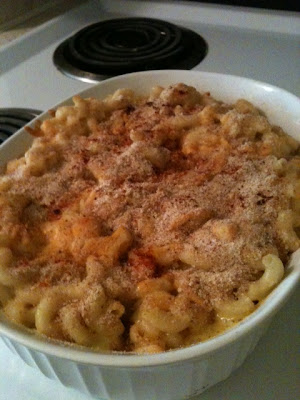 Jonathan came home and devoured half of it! I was so proud of myself as finally we can have a real comfort food that (though not the healthiest) doesn't come from a box. And the crowed goes WILD!!!

What's for lunch today Teaka? So happy you asked....some awesome Mac and Cheese of course! :)

Click on the link to see where I got this recipe from Simple Recipes.
Posted by Teaka at 10:13 AM

Totally blog worthy :)
We grew up with it both ways, Justin won't eat it from a box either...Congrats on winning your hubby over!

you are my hero. Coming from a girl who's man cooks better than her, it's a high compliment when they eat half (or more) of what you make!