Teen Girls and A Fashion Show

What does a dozen middle school girls, Marie Antoinette and a fashion show have in common? Well actually not a whole lot but the combination does make for one crazy fun Friday night.

Last Friday at youth we split the guys and girls up and spent the evening doing activities we figured they'd enjoy. What not a better way to share the evening with a bunch of teen gals then talking fashion and just goofing off. And just on a side note I forget that this is the generation OBSESSED with that Justin Bieber kid! Insane how long they can talk about him. (Er...not so cool)

Anyways I did spend about 20 minutes comparing Marie Antoinette and Esther and their relationship with with clothing. Since I love history I thought this would a great way to talk to the gals about our motives for dress. For instant Marie Antoinette was like the queen of fashion as she found her power and popularity in creating a look for herself. She used clothing to portray an image of power and got rather consumed (this is all in a nut shell) with it all and spent millions upon million of dollars on her wardrobe. The people revolted and she was of course executed. Now on the other hand Esther (From the Bible) pretty much won a beauty contest and put a lot of effort into making herself beautiful for the king. But ultimately didn't get caught up in the glamor and show of it all but instead focused on a task much bigger than herself, persuading the king not to kill the Jewish people in the land. So the moral of these stories, we should have fun with dressing up, trying new styles etc but there's a fine line that can be crossed when it comes to fun or obsession which could cause a lot of trouble in one's life.

Yeah, so an incredibly basic teaching but it was a great way to connect a bit more with my girls and also a great way to tie in a crazy fashion show of costumes, random objects and toilet paper. 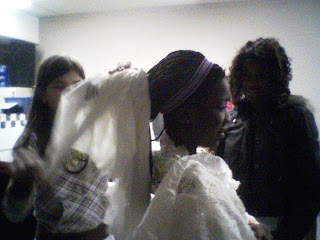 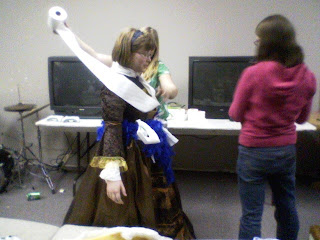 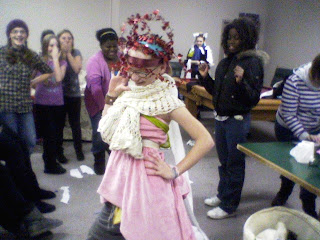 At the end of the night there was a huge mess, we were all exhausted but it was a grand time for all.
Cheers
Posted by Teaka at 10:25 AM