I can not believe it's Friday already! There are mix emotions because though I'm thrilled it's the weekend I'm also sadden that very soon I'll be returning back to studies and my classes. I'm just not ready to give back my beloved free time. But so goes the seasons of our lives.

Speaking of free time, later last night Jonathan and I had a bit of free time so he suggested that we take walk. It was really rather beautiful outside so I was totally game for that. I thought we'd go just around the block but instead he got into the car and rather curious I followed. He took me down town to the where the Christmas lights were at the Galt Gardens. What a delight!

Normally each year we've been able to make it down to see the lights or to spend the evening there during the Christmas Movie Night they have to kick start everything. I've always love it but sadly this year we were  never able to make it down. Well better late then never.

We began walking around but after some observation and discovering that music was being played we both decided it was a rather sad little sight. Not a soul was in the park, the snow was mostly melted, lights bulbs dying out and Blue Christmas was playing through a speaker that was distorted and also dying. So this is is what remains of last years Christmas. Not much at all. It sort of felt like we were in a movie that was just nearing the end. We probably should have kissed passionately under a half light tree while the credits roll by just to sum it all up. 2010 is all over, shows done, time to leave the theater and move on. 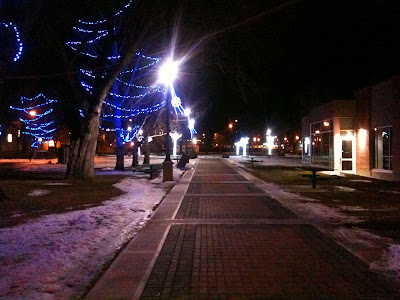 I loved my Christmas and the time I got to spend with both my families. It was an amazing year with new discoveries, challenges and delights and so I'm sure I'll always remember 2010 as one of my favorite so far. But on that note it's also come and past, credits have rolled. Time to start this next year with the man I love. 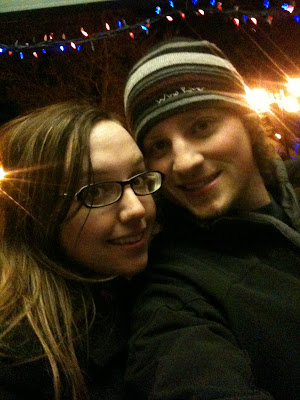 that sounded sad and happy all at the same time. that' so romantic that you guys go on walks and do fun stuff together :) good luck with your new semester!

adorable. Still sad I missed you while I was home!