Alright, so do you remember a few post back when I wrote about this new discovery about the world of coupons and how regular people can work the system and gets tones of stuff for next to nothing? Well I was super excited about trying my hand at this game and seeing if I could save some money on my own grocery bill.

The next few days when the flyers came to my door instead of throwing them away I took some time to look through them and clip out the coupons I thought would be of benefit. Then on Sunday Jonathan and I headed over to the store Sobeys which I thought I clipped coupons from and began filling our grocery cart with all these goodies. I was thrilled because I was going to save almost half on my bill with a bunch of "Buy One Get One Free" coupons. We get to the till and unload all the items and let the cashier do her job. Jonathan even signed up for a Sobey's  membership card to make sure the coupons would work for us. After all was said and done our grand total came to around $80. No problem I whipped out my handy coupons and presented it to the cashier. She looked at them for a bit but soon called over another cashier. He just glanced at them and said, "These aren't for our store."........................... Shocked, I looked to Jonathan who chuckled a bit. I looked back at the cashier who was looking back at me. How in the world did this happen? Taking the coupons back I realized that they were all for Save On Foods, not Sobeys!!! DANG!  So there I was standing in defeat. My thrill for saving tones with coupons only cost me more. Not wanting to face the line up of people behind me and attempt to return it all I gave her my debit card and cringed as I purchased two of almost everything in my cart that I really didn't need. I failed. I was so pumped to go shopping that I neglected to actually look at what store exactly it was that I was to go shopping at!!!!! The coupons were green, Sobeys was green..... but I guess so is Save On Food. 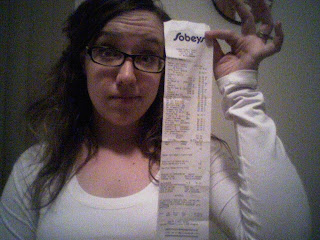 Needless to say Jonathan and I had a good laugh once we got back in our car. It was a rookie mistake and one that won't deter me from further couponing but still one that left me utterly humbled.

Tomorrow, I'll see what I can return of those items back to Sobeys and maybe if I'm really up for it take my coupons to Save On Foods instead and fill up a cart.