Four years ago I moved to Lethbridge to be an intern at the Miracle Channel for a 4 month television schooling. During that that time we spent a portion of our learning in our own cubicles right in the middle of the production area. These dull walls parting us from one another is where my crush on Jonathan began. He was the first to start flirting with me as each time he'd pass by my cubicle he's snatch up a mitt of mine and hold it hostage till a while later he'd fling it back over to my side. And even though we were only a wall or just a head peak apart we began to messages each other through g-mail chat and what not. All though at the time we were only friends and I figured it'd only stay like that I can still remember the sound of his office chair starting to roll over to my side just for a random chat or to ask a question regarding an assignment we'd be working on. My heart would skip a beat when I head the wheels starting to squeak over.

Weren't we so cute back then. Ha ha 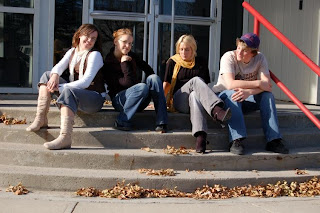 Well that was awhile ago and our relationship didn't start till over a year after that point. But I'm writing about those memorizes because today they are finally tearing apart the cubicles to make the production area more open. It's rather a mess now as they are taking apart the walls but the office space is beginning to look a lot better even with this adjustment.  So now that physical structure that would trigger my memory when I walked by, about my crush on Jonathan 4 years ago, is gone.

It's really not a big lose to me. But I told Jonathan that maybe I should steal one of those wall panels and bring it home. Ha ha....wouldn't that make lovely decor.

This is what the office looks like now with all the deconstruction going on and where the cubicles use to be. 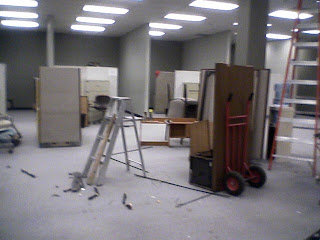 that's do cute teaka! i love hearing about people's love stories. i think you should bring a wall panel home, or at least a piece of it and you can write something on it and frame it or something? just for sentimental reasons :)