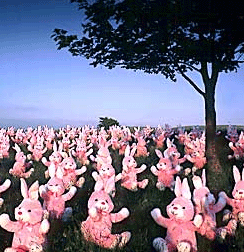 Elizabeth once sewed for me a stuffed pink rabbit for my birthday? With a flower crown and buttoned on arms. It was just a pretty delicate rabbit but his arms kept falling off.
And then there was a tiny, white, weird rabbit she randomly sewed for me with only a body and drawn on arms and legs but a cute stitched on face.
And then one Christmas Dad gave me a cardboard rabbit that he cut and put with arms and legs that could rotate around.
Mom also sewed me a stuffed rabbit with a purple dress, this was one of my absolute favorites that I slept with every night.
I also had two rabbits Elaine and Oatmeal....both I thought were sisters. Until I found tiny little rabbits hopping around one random day. Turns out Elaine was actually a boy! From then on more rabbits appear. Almond, Rings, Peter, Fluff, Tiny, etc...and it turned into an epidemic...a weird one. Very few bunnies survived!
One day a friend gave me one of her rabbits that was being beat up by another male rabbit. I took it in and renamed it SB (Special Bunny) and over a month it regained all it's fur and was cute again in my rabbit hut. Turns out she was a girl too....thus more bunnies.
My friend then gave me her other two rabbits, on male and one female.....and I had an endless supply of bunnies, many rabbits found a way to dig out of their outdoors pen and ran off which lightened the load but from what I could recall I had a LOT of rabbits one summer.
Thankfully a couple came to our farm to buy my brothers goats, they looked at my rabbits and decided they wanted to buy a few...turns out they bought ALL of them! I was thrilled! NO MORE RABBITS! Thank the Lord....plus I made like $100 which was nice.
Anyways that was just a random thought.
Ah the years of rabbits.
Posted by Teaka at 8:40 AM

So, do you have any desire to get another rabbit? Or are you finished with them? Seems like you're pretty good at breeding them!

do you still have that pink rabbit?

No more rabbits! And it's not my fault they were breeding! The bunny's parents we're siblings...stupid rabbits!
And I'm pretty sure I still have that pink rabbit but it'd be with all those other stuffed animals in the house somewheres...sigh...somewheres.