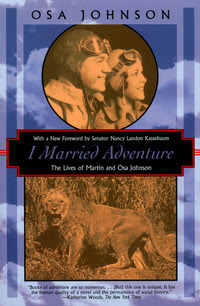 I think understand why I was drawn back to the book “I Married Adventure” over and over again through the years. The thick thrown away library book soon became my runaway escaped into the 1940's world travel and the pinnacle of cinematography. Osa Johnson quite easy became the women I desired to one day live like. Her extremely ordinary life in a small town in Kansas soon altered in only a few months after she met, fell in love and married the young and aspiring traveler Martin Johnson. But you know it wasn't the love story that captured me and it wasn't the actually traveling and sailing through unchartered waters, exploring islands and discovering new and “untouched” tribes that became so inviting to me. Perhaps it was the getting involved in something that didn't souly included her, it wasn't about Martin's pursuit for her and it certainly was not about Martin's desire to get married to a girl so he could finally feel complete in what he wanted to do with life. Martin could have easily done everything he had accomplished with Osa all by himself. In truth he could have explored more, been more adventures and daring in his explorations had Osa not accompanied him on in his travels.
Perhaps women, or maybe this is just me, but perhaps theres something in us that desire to be invited to become apart of an adventure while all along knowing your not the adventure and neither is the one you marry the adventure. Martin certainly pursued Osa for her hand in marriage but had she not accepted this would have not ended Martin's life because he still had dreams and plans for something bigger than meeting a women. This proposal was more of an invitation to share and take part in an adventure so much bigger than the two of them. It wasn't about Martin getting married then starting his explorations, the adventure was there before he ever met Osa. Osa knew she was desired my Martin not because he pursued her like he did the unseen islands and sights but because he invited her to share into something bigger than herself. She was not Martin's adventure.
Posted by Teaka at 9:18 AM

Ohhh sounds good... and insightful. Thanks for the reference and the summation of the book. I can't wait to read it!